I think all of us are aware that the market is indeed slow. A close friend told me yesterday that last month she sold her condo unit because the rental was was too low compared to monthly repayments and she did not want to keep paying RM500 for maintenance fees every month. Her unit which was over 1,600 sq ft was once priced as high as RM900,000 in the market but she sold it for slightly over RM800,000. When it was just completed, she was once offered RM850,000. Fortunately for her, she bought it much earlier and thus could still earn some profits. The good thing for the property market is, she is now scouting for good deals. She hope there are others who are willing to sell lower, just like her.  PropertyGuru had just confirmed that situations like hers will still be happening for some time yet. Do read the Press Release below.
— start–
PropertyGuru: Property Market Remains Stable – Still A Buyers’ Market
PropertyGuru Market Index indicates market stability as asking prices decline marginally nationally with sideways movement seen in major property markets
KUALA LUMPUR, 20 November 2017 – According to the PropertyGuru Market Index (PMI) which tracks the asking prices of homes in Malaysia, prices of residential homes on the whole, remain stable with a 0.2 percent decrease from Q2 2017 to Q3 2017. On a year-on-year comparison (Q3 2016 to Q3 2017), asking prices continue to show a drop of 2.3 percent.
Despite a recovery in consumer sentiment, asking prices have yet to reflect this positivity – a potential indicator that sellers are still unable to find buyers and are coming under pressure to moderate their asking prices to conclude property transactions. Hence, the slow appreciation on a nationwide level with some key markets such as Selangor and Penang continuing to show price decline on a quarterly basis.
The PMI is derived from PropertyGuru’s extensive proprietary data, which includes (but is not limited to) the asking prices of over 250,000 residential property listings on PropertyGuru.com.my.
“As mentioned before, 2016 and 2017 have largely been buyers’ markets and the market has stabilised. The PMI’s yearly and quarterly trend lines indicate this. Barring any unforeseen circumstances or major developments, this trend line will persist for the rest of 2017 and likely up to early 2018,” explained PropertyGuru Malaysia Country Manager, Sheldon Fernandez.
KL, Selangor and Penang Indices Show Declining Prices 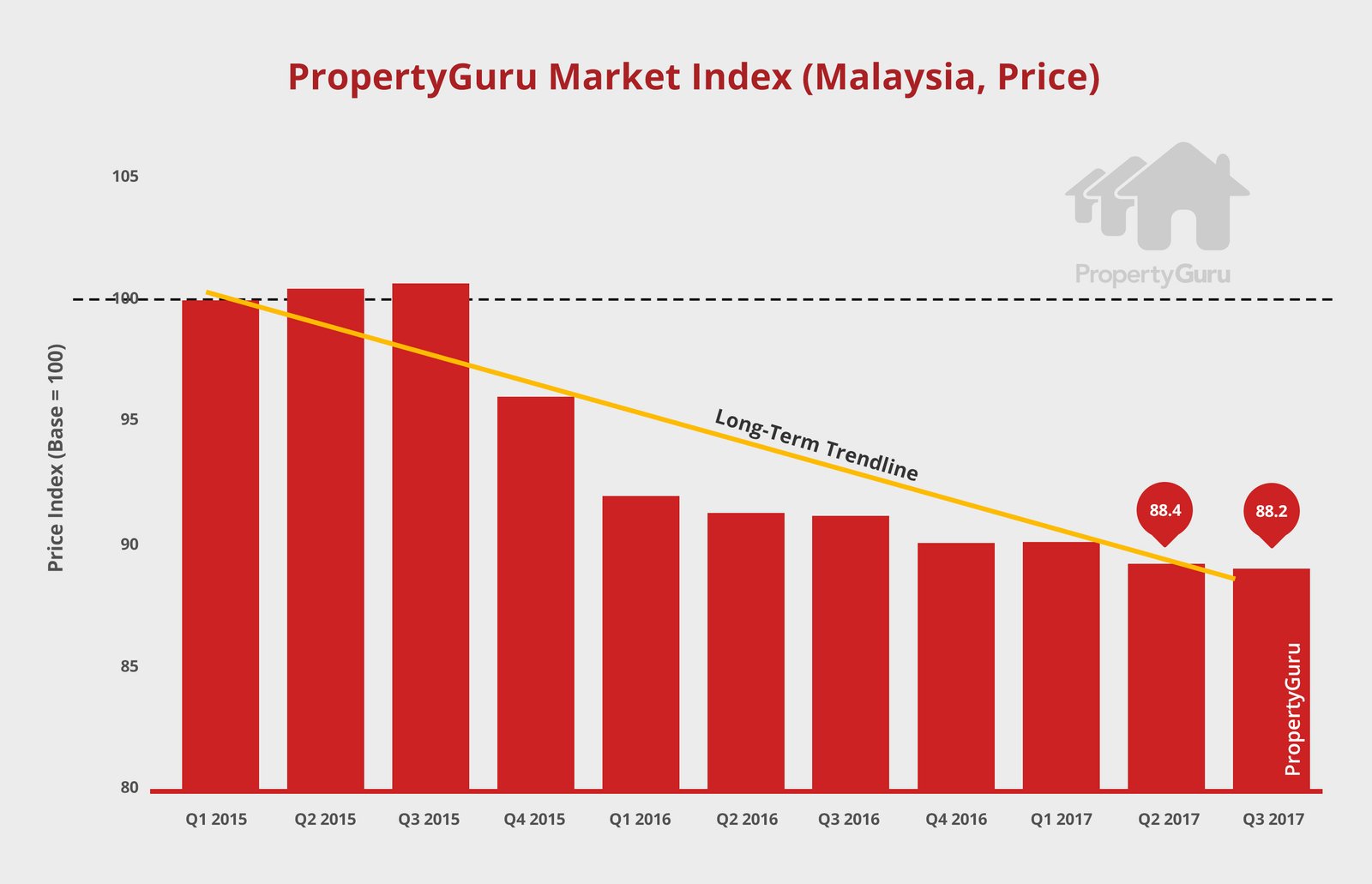 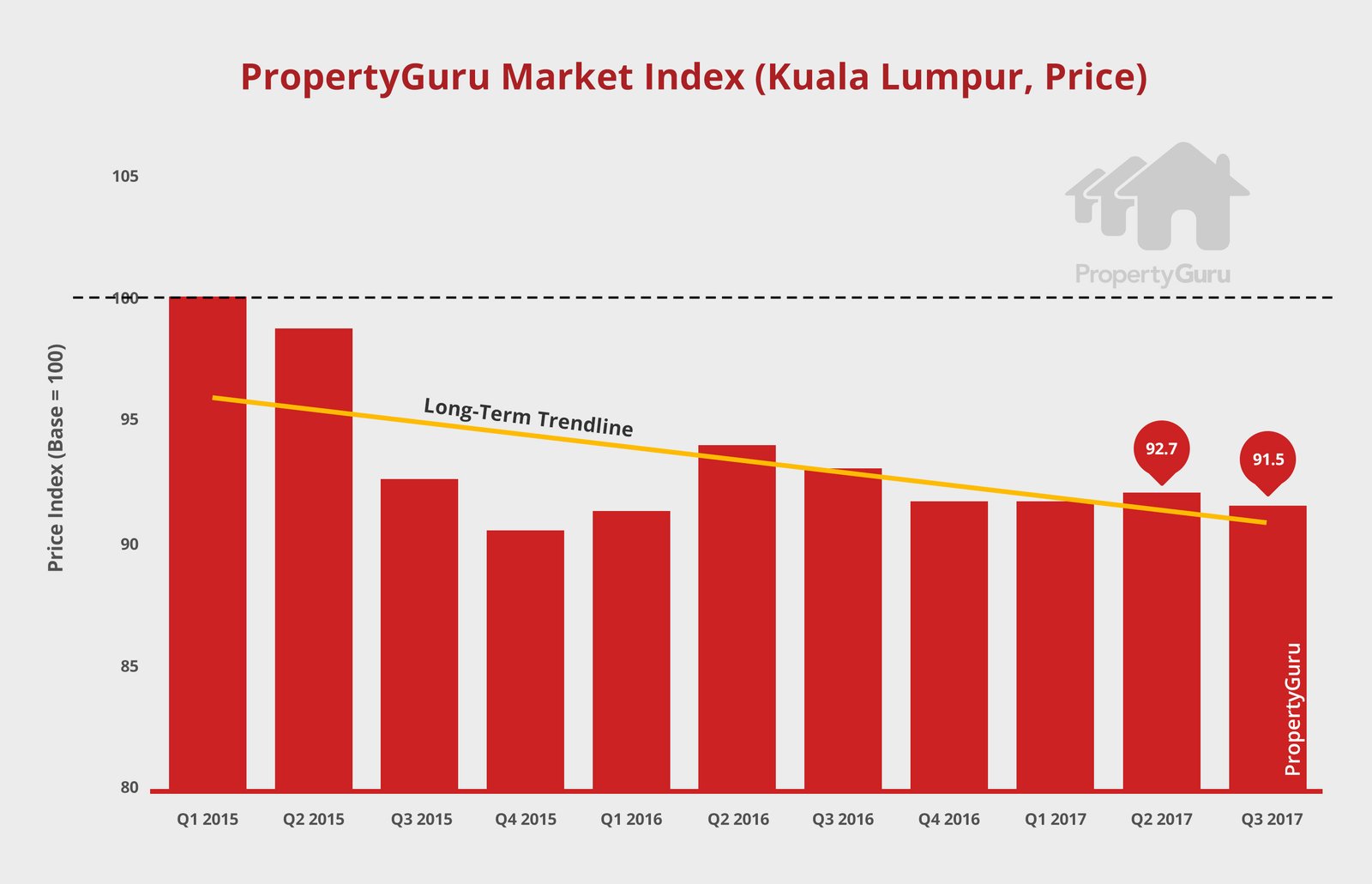 As prices moderate on a national level, the PMI indicated a drop of 1.4 percent in asking prices in Q3 2017 for Kuala Lumpur. The decline comes after a 0.4 percent increase in Q2 2017. On a year-on-year comparison (Q3 2017 to Q3 2016), KL properties saw prices decrease by 2.3 percent.
Despite a string of property launches, property prices in hotspots such as Bukit Jalil and Segambut remain under pressure due to weak demand. The PropertyGuru PMI shows asking prices for properties in Bukit Jalil declining by 2.0 percent in Q2 2017 and 1.0 percent in Q3 2017. 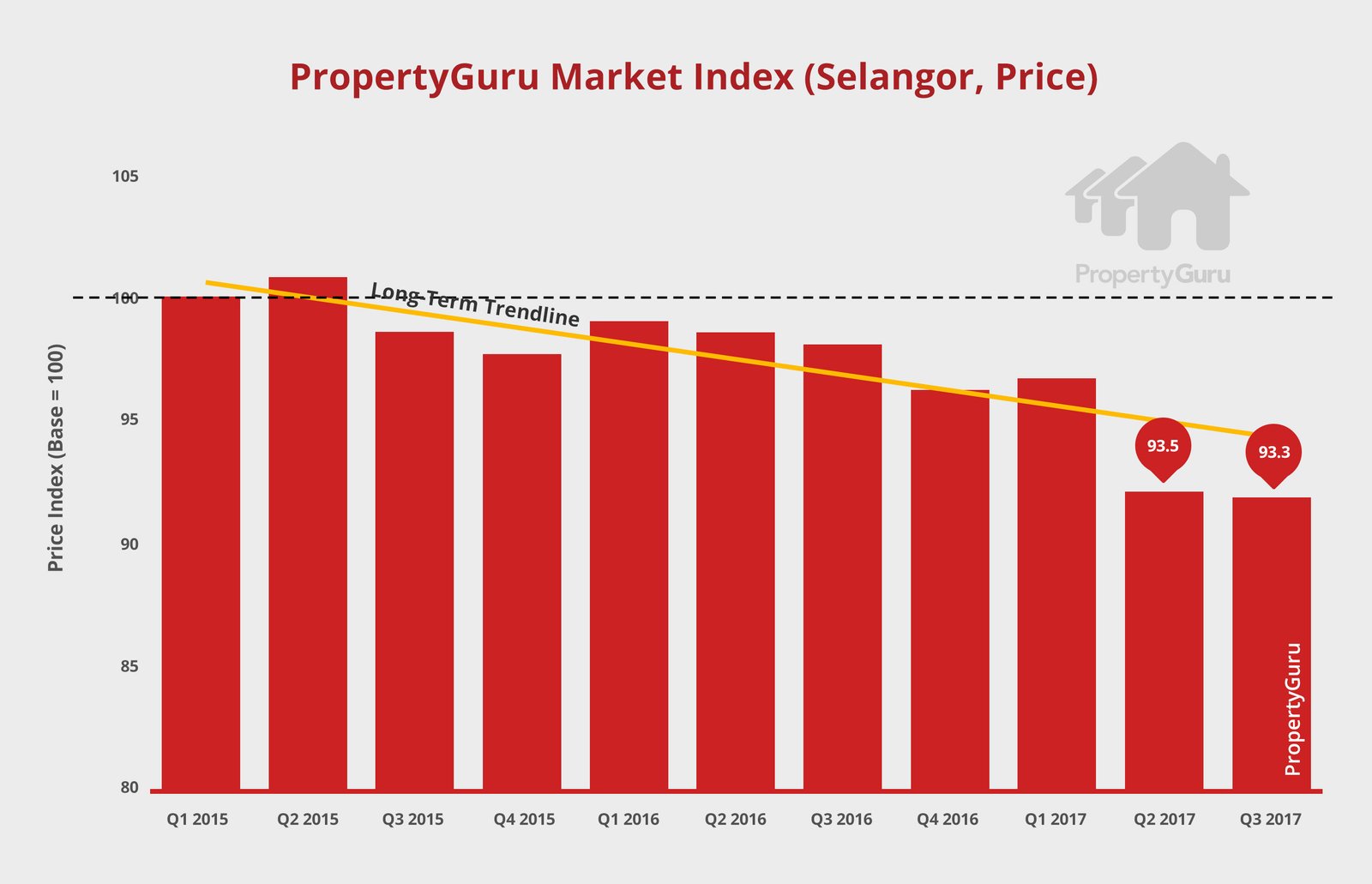 Property prices in Selangor continue to decline, albeit moderately. In Q2 2017, prices declined by 2.7 percent with a significantly smaller decline of 0.3 percent registered in Q3 2017. In a year-on-year comparison, the PMI for Selangor showed a 4.6 percent drop from Q3 2016.
Locations such as Setia Alam and Kajang show lower asking prices but bucking this trend are properties in Klang. For Q2 and Q3 2017, asking prices in Klang have appreciated by 0.4 percent and 1.2 percent respectively.
“Klang is now considered a property hotspot and growth area, especially with the imminent development of the LRT 3 and other infrastructure projects. Property investors are flocking to Klang to capitalise on the growth opportunity. We saw this in Klang, Sungai Buloh and other areas prior to the construction of the MRT line. Now the same is evident for Klang,” explained Fernandez. 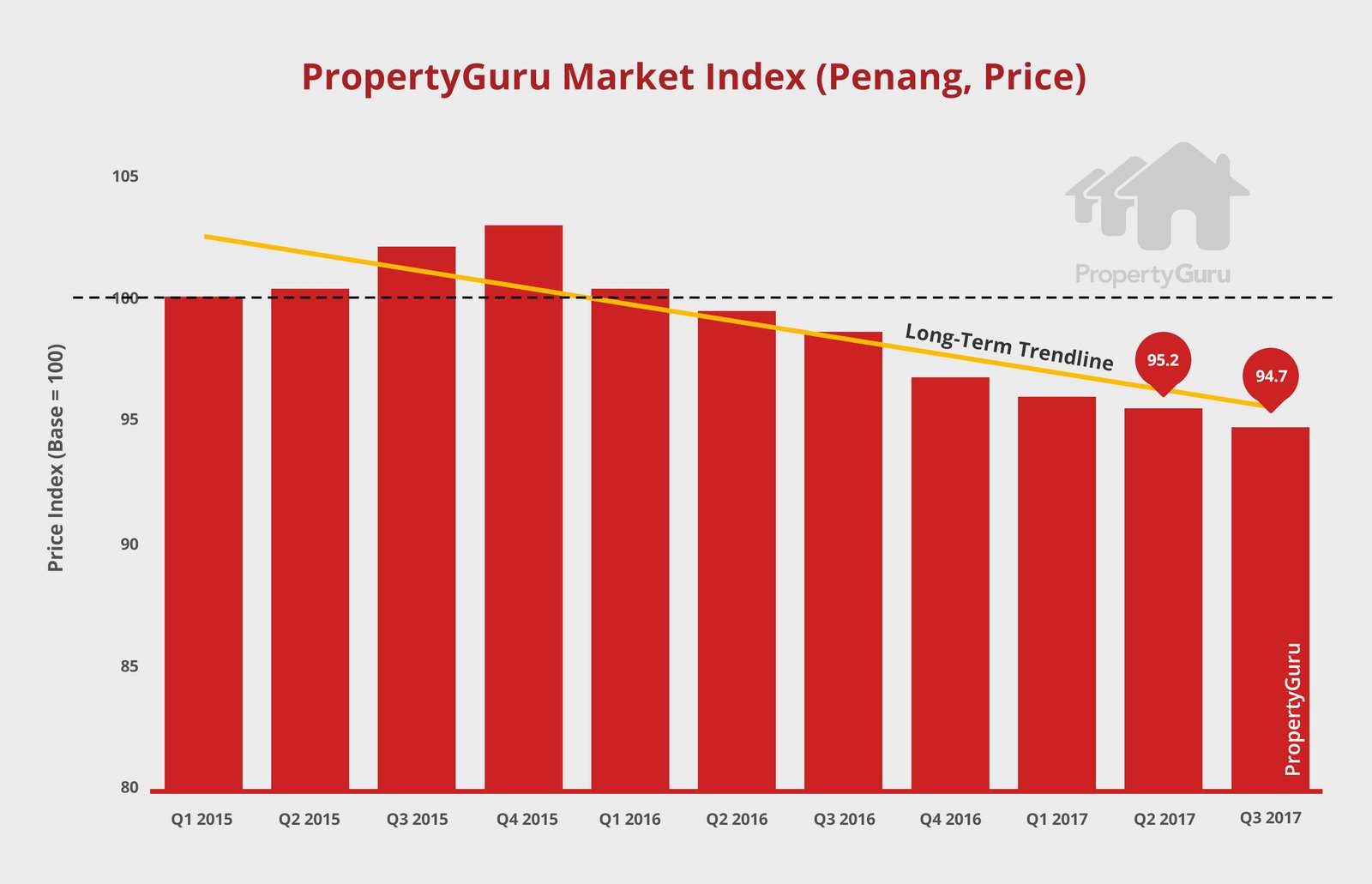 In Penang, prices have been steadily dropping for six consecutive quarters since Q2 2016. The quarterly trend saw a 0.8 percent and 0.6 percent decrement for Q2 2017 and Q3 2017 respectively. On a yearly comparison prices were still 3.4 percent lower (Q3 2016 to Q3 2017).
Asking prices in key locations such as Paya Terubong and Batu Kawan continue to decline. In the former, the PropertyGuru PMI shows a 3.7 percent decline in Q2 2017 and a 0.8 percent drop in Q3 2017. In Batu Kawan, the PMI show a decline of 5.4 percent and 2.5 percent for Q2 2017 and Q3 2017 respectively. On the mainland, prices in Seberang Perai have also declined with the PMI indicating a drop of 5.6 percent for Q3 2017.
“The decline can be attributed to the impact of the various cooling measures introduced to the Penang property market that has led to a period of supply consolidation and price correction. These measures include price controls on affordable housing units with a 10-year and five-year suspension on low-cost, low-medium cost and affordable housing, respectively has resulted in the price adjustment,” shared Fernandez.
Fernandez also added that the impact of the floods in Penang is yet to be ascertained but could see property prices moving downwards further going forward.
Johor Sees Price Appreciation 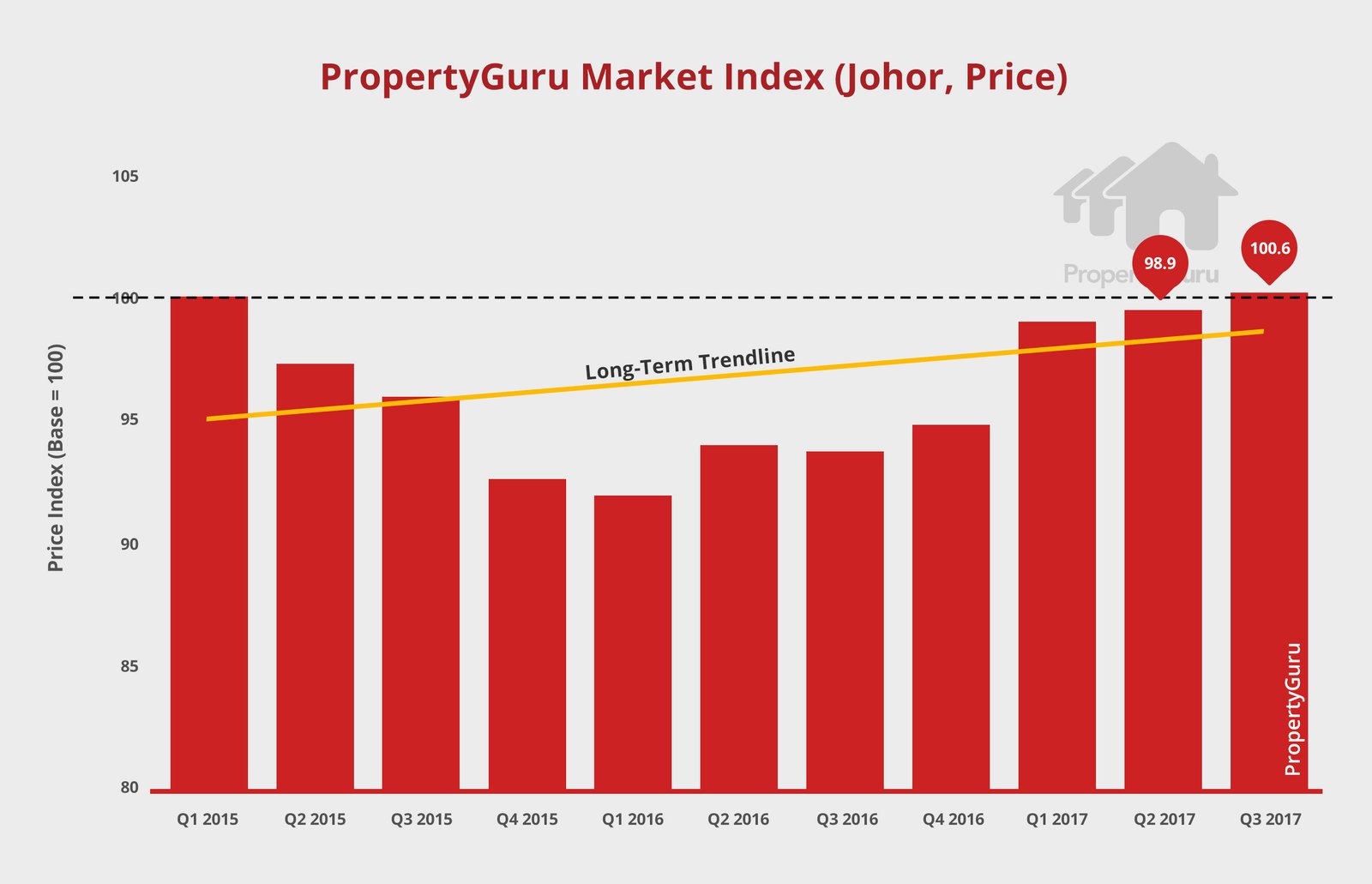 The Johor property market remains an exception with prices strengthening by 0.5 percent and 1.7 percent in Q2 2017 and Q3 2017 respectively. On a yearly basis, Johor’s Market Index has experienced the most improvement with an increment of 7 percent from Q3 2016 to Q3 2017.
This is the 4th consecutive quarter that Johor property prices have been on the uptrend. The entry of foreign property buyers may be a factor pushing asking prices up, coupled with the weakening Ringgit. Mega development Forest City has brought in foreign investments into Johor. This coincides with the Johor Market Index improving since Q3 2016 until Q3 2017.
In Johor Bahru city, asking prices show consecutive growth of 0.1 percent and 0.8 percent for Q2 and Q3 2017 respectively. Pasir Gudang also shows an upward trend of 0.4 percent in Q2 2017 and a whopping 11.6 percent in Q3 2017.
Unaffordability Remains
While prices have not appreciated much and asking prices have moderated, unaffordability remains a major issue with many potential buyers expressing dissatisfaction with prices.
“Our data shows that 50 percent of Malaysians wish to transact within this year. But despite the existing market stability and the incentives provided by property developers, consumers feel that properties are still overpriced. We’ll have to see how this plays in the upcoming quarter,” said Fernandez.
PMI is a comprehensive, insightful quarterly overview of home pricing trends at national level, as well as the key property markets of Kuala Lumpur, Selangor, Johor and Penang. The data is cleaned, aggregated and indexed to provide insights into price movements on a quarterly basis. The index also considers supply volume of properties from both the primary and resale markets.
The PMI is available to the public at:http://www.propertyguru.com.my/marketindex.
— end of Press Release —
Next suggested article: property market down cycle may be longer than usual

PrevPrevious71 pct of loans to first-time home buyers. Positive.
NextTime to know what’s UP with Balik Pulau property with an expert. (Not me lah)Next