Developers and owners across the board are tempering their expectations as the industry adjusts to the closing of the Home Ownership Campaign (HOC) and a lack of strong catalysts this year, according to the PropertyGuru Malaysia Property Market Index (MPMI) Q1 2020 report.

The overall MPMI for the country dropped by 1.04 index points from 89.94 in Q3 2019 to 88.90 in Q4 2019, representative of a longer-term decline. These adjustments, in conjunction with Bank Negara Malaysia’s (BNM) recent Overnight Policy Rate (OPR) revision and Budget 2020’s emphasis on rent-toown (RTO), serve to make property in Malaysia a buyers’ market in the near term.

“Asking prices have been on the downtrend since Q4 2016, bringing costs of home ownership down with them. In addition, OPR cuts such as BNM’s in January often lead to lowered interest rates for loans and short-term hikes in approvals, making it an opportune time for property seekers,” said Sheldon Fernandez, Country Manager, PropertyGuru Malaysia.

“Finally, RTO schemes reduce the upfront costs and risks of home ownership by doing away with down payments and allowing participants to opt out of purchases. In line with our goal of helping Malaysians make informed and confident property decisions, it should be noted that RTO financing may cost more in the long run than conventional loans.”

In totality, these factors serve to shore up home seeker sentiment moving forward, though not to the extent of 2019’s HOC. However, impacts here may only be apparent in 2021 and later, due to the delayed purchasing decisions inherent to RTO schemes.

“Confidence in this sub-sector may be due to a rising desire among young professionals and DINKs (double-income couples with no-kids) to live closer to urban centres and places of work to overcome the inconvenience of travel time and cost,” said Fernandez. “

In this scenario, mid-sized serviced apartments in well-connected locations that are either directly linked or close to commercial amenities are benefiting from increased demand. However, this is highly dependent on area, and should be approached cautiously given the current oversupply of high-rise in some localities.”

Finally, the recent global outbreak of the novel 2019-nCoV coronavirus strain, while having no direct impact on Malaysia’s property segment to date, may see increased interest in domestic properties from international purchasers in coming quarters, particularly in Penang.

Prices are likely to continue their downward trajectory, with supply seeing a 28.8-point increase quarteron-quarter (QoQ), and 87.56-point growth YoY in Q4 2019. This will likely see developers and property owners adjusting prices to remain competitive, prolonging the downturn. “

The incoming supply of residential properties reflects sustained long-term confidence in Kuala Lumpur as a hotspot, although this influx into a region that is already coping with sizeable existing stock does not suggest that the price average will be moving upwards in the near term,” said Fernandez. “

In the meantime, programmes such as Residensi Wilayah and Cagamas Bhd’s Skim Rumah Pertamaku (SRP) will continue to bridge the gap between consumer demand and developer portfolios.”

Selangor showcased the most stable asking prices among Malaysia’s major markets, with its MPMI dropping just 0.08 index points from 91.51 in Q3 2019 to 91.43 in Q4 2019. While this downtrend mirrors similar patterns in other markets, Selangor’s minimal price movements in the past quarter may indicate an adjusted equilibrium for the state moving forward.

As with Kuala Lumpur, the supply of residential properties in Selangor increased significantly by 84.57 index points YoY, underscoring its desirability as an economic powerhouse for the nation. This also accounts for continued developer interest in the state, as industry players focus on its long-term potential. “

Given Selangor’s existing stock of 1.5 million residential units, along with 4,620 newly completed units and 6,872 planned units according to Napic, developers are adopting various strategies to stimulate demand,” said Fernandez. “

Johor and Penang: oversupply and affordability

The downtick can be attributed to ongoing oversupply concerns in the state, with available residential properties increasing 25.32 index points QoQ and 185.44 points YoY in Q4 2019 – much higher than equivalent figures in Kuala Lumpur and Selangor. “

When discussing supply concerns, property overhang units must not be confused with unsold stock. The government has defined overhang units as properties that are completed and issued with Certificates of Fitness for Occupation (CFO) or Temporary Certificates of Fitness for Occupation (TCFO), but remain unsold despite having been put on the market for at least nine months,” said Fernandez. “

Oversupply, on the other hand, is defined as a greater supply of something than is required. Overall supply consists of all planned, incoming, unsold and existing supply (including overhang) units. Unsold units are referred to as ‘oversupply,’ and are mainly contributed by overbuilt properties as well as mismatches in price, location, products and affordability.”

In Johor’s case, the state is experiencing both overhang and oversupply issues in its residential stock. It remains to be seen whether the state government’s decision to lower foreign ownership thresholds to RM600,000 for the first nine months of 2020 will impact these numbers, given the policy’s muted impact elsewhere.

Last but not least, Penang was the only state to report a decrease in residential supply, contracting by 13.51 index points YoY, though stock grew marginally by 0.94 points QoQ in Q4 2019. This may be attributable to diminishing land availability on Penang Island.

As such, though asking prices dropped by 0.35 index points from 95.74 in Q3 2019 to 95.39 in Q4 2019, continuing demand for residential properties on the island may lead to an uptick once macroeconomic conditions improve. “

This is balanced by cautious stance towards overdevelopment adopted by the Penang state government in recent years, with incentives to be given to developers who focus on developing affordable units,” said Fernandez, “

Meanwhile, regional unrest has seen a rise in foreign interest in Penang, given its relatively attractive pricing and location. Industry players are taking advantage of this situation to clear unsold units by offering various incentives to lure international buyers to the state.”

The PropertyGuru Malaysia Property Market Index shows seller sentiment and indicates the price level that real estate developers and homeowners feel that they can fetch for their respective properties.

Using a range of statistical techniques, the data from over 450,000 property listings on PropertyGuru.com.my are aggregated and indexed, demonstrating the movement of supply side pricing.

The Index reflects the most recent (Q4 2019) price trend, relative to a reference period of Q4 2016. This means that aggregated price levels are denominated as 100 at Q4 2016, and all subsequent quarters’ pricing are relative to that.

Next suggested article:  Impact of slower GDP growth on the property market

PrevPreviousFirst to announce a revised GDP number downwards.
NextWhen there’s an acute shortage, it may not even be money that matters.Next 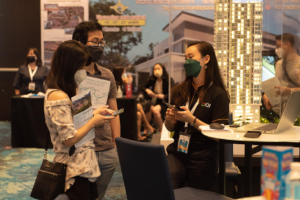